In this post, we will start with a quick introduction to Docker and then learn about from my curated list of guideline to help you build docker in a faster & structured way.

What is a Docker? What is a Container? Why Docker? Is Docker is same as VM?

In terms of efficiency and performance, a new era started when the virtualisation came into IT. There were too many application systems(traditionally built server side architecture) which used to reserve all the resources for a job/application that would required only 1 – 2% of the hardware resources were replaced by virtual servers, hyper visors to double, triple or even quadruple these resources utilisation.
But these improved virtualisation solutions came at reasonable costs. Every virtual machine requires its own operating system(unix/linux/ubuntu/windows), so each container carries their own set of libraries many of which were common. Some common libraries are like for network management, memory management, cpu jobs management and user & security.
It is in this evolutionary process, the rise of Containers came to light. Containers are like a lightweight VM’s that allow sharing few limited resources(kernel, cpu, memory) with a Host Operating System., that acts as a virtual os for application to be deployed.

To put simply, you can think of containerisation as a multi-tenancy implementation at the OS level. 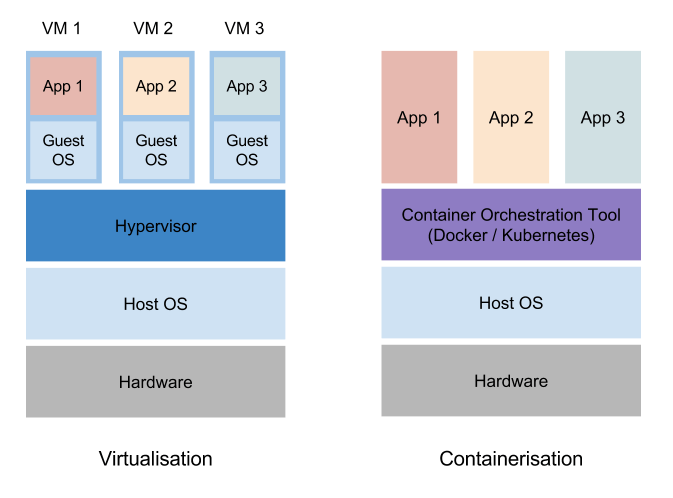 To learn more about docker, you can visit following

1. Choose the right base docker:

DockerHub is like your github community. In most development scenario, you can find a suitable base container image. When you can find a readily available solution why build from scratch?

For example: Say you are building a custom Python or Scala based application. Instead of building whole docker from scratch, you just choose list from list of well tested and readily available solutions.

Always search for pre existing solutions(docker images) if you cant find them then try searching docker images on top of which you add to save time and effort.
Few key things to remember while selecting a docker image as your base image

This is good in production and stage but in development I often see after running docker, one does the following steps

So use “–rm” instead of “-d” param during development, to view logs interactive. When running in interactive, use “ctrl+c” or “docker rm here_your_docker_name”to stop docker.

While “-d” used to run docker in background, “–rm” is used to remove container once it is stopped.

In unix env, may be a developer cannot find more friendly tool than Make Utility. Make can be a wonderful utility that not only documents what all commands a user can run but also can simplifies the jobs executions to be more readable.


To run above 4 commands at once

Here it might look simple for readers, but during the building docker building stage you may have to add 2-3 port, 1-2 volume mount, name, docker name,.. etc eventually make it too big.
Prepare a makefile when you start to notice increasing list of command for build a docker.

Docker files are supposed to be building only the technical stack that an container operating system and not running the services. For example an Airflow Setup often required developers to ssh services for remote task executions.
A well written Airflow Image servers as webserver, scheduler, worker and celery-flower. Additionally available airflow debug features or running airflow in different modes(celery, not celery).. All this functionality can be simply set in Entrypoint.

Although readymade solutions are there, more than once developer have to check or install to investigate the functionality of running docker images. To login as root user, once use following to logging to a running docker

AWS SECRET KEYS:
To access AWS services without the need of setting Host instance roles. Helpful in faster developer yet unsafe practice. Passing AWS Secret keys or any cloud or authentication keys
SSH Keys
AWS or Other cloud credentials are some critical information one must protect at all costs. While Cloud technologies make development, deployment and running production jobs easy, lack of security knowledge can potentially destroy companies reputation as well vulnerability

Although Container are wonderful, they are not always the best solution for all the use-cases. In some cases, VM or traditionally built systems could provide richer results. For example a database server or a messaging broker or security & health monitoring system.

A day at Google Cloud OnBoard 2018

What is Amazon Redshift its architecture and components ?

Venkaiah Pottela·September 26, 2016
There are no comments yet No comments