This blog is to clear some of the starting troubles when newbie codes for Spark distributed computing. Apart from learning the APIs, one needs to equip themselves with cluster details to get best of the Spark power.

The starting point would be Cluster Mode Overview .

And some common questions that might pop up are:

Spark uses a master/slave architecture. As you can see in the figure, it has one central coordinator (Driver) that communicates with many distributed workers (executors). The driver and each of the executors run in their own Java processes.

The driver is the process where the main method runs. First it converts the user program into tasks and after that it schedules the tasks on the executors.

Executors are worker nodes’ processes in charge of running individual tasks in a given Spark job. They are launched at the beginning of a Spark application and typically run for the entire lifetime of an application. Once they have run the task they send the results to the driver. They also provide in-memory storage for RDDs that are cached by user programs through Block Manager.

When executors are started they register themselves with the driver and from so on they communicate directly. The workers are in charge of communicating the cluster manager the availability of their resources.

In a standalone cluster you will get one executor per worker unless you play with spark.executor.cores and a worker has enough cores to hold more than one executor.

Following are the spark-submit options to play around with number of executors:

Spark standalone and YARN only:
–executor-cores NUM             Number of cores per executor. (Default: 1 in YARN mode, or all available cores on the worker in standalone mode)

With this in mind, when you submit an application to the cluster with spark-submit this is what happens internally:

Spark automatically deals with failed or slow machines by re-executing failed or slow tasks. For example, if the node running a partition of a map() operation crashes, Spark will rerun it on another node; and even if the node does not crash but is simply much slower than other nodes, Spark can preemptively launch a “speculative” copy of the task on another node, and take its result if that finishes.

If we look the execution from Spark prospective over any resource manager for a program, which join two rdds and do some reduce operation then filter 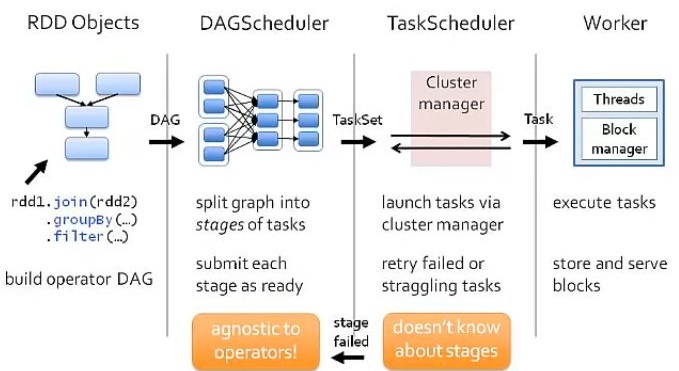 Following list captures some recommendations to keep in mind while configuring them:

Two things to make note of from this picture:

Tiny executors essentially means one executor per core. Following table depicts the values of our spar-config params with this approach:

Analysis: With only one executor per core, as we discussed above, we’ll not be able to take advantage of running multiple tasks in the same JVM. Also, shared/cached variables like broadcast variables and accumulators will be replicated in each core of the nodes which is 16 times. Also, we are not leaving enough memory overhead for Hadoop/Yarn daemon processes and we are not counting in ApplicationManager. NOT GOOD!

Fat executors essentially means one executor per node. Following table depicts the values of our spark-config params with this approach:

Analysis: With all 16 cores per executor, apart from ApplicationManager and daemon processes are not counted for, HDFS throughput will hurt and it’ll result in excessive garbage results. Also,NOT GOOD!

According to the recommendations which we discussed above:

So, recommended config is: 29 executors, 18GB memory each and 5 cores each!!

Analysis: It is obvious as to how this third approach has found right balance between Fat vs Tiny approaches. Needless to say, it achieved parallelism of a fat executor and best throughputs of a tiny executor!!

–num-executors, –executor-cores and –executor-memory.. these three params play a very important role in spark performance as they control the amount of CPU & memory your spark application gets. This makes it very crucial for users to understand the right way to configure them. Hope this blog helped you in getting that perspective…

SDN or NFV – Which One Should I Use?

What are different Cloud Computing Models?

Experimenting with Containers in the NFV World

Raghavendra Kambhampati·December 31, 2019
There are no comments yet No comments